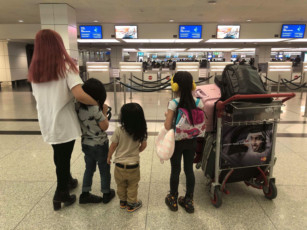 Dubai: A Filipino family’s harrowing experience after overstaying in the UAE for six years is finally over and they have one advice for people going through the same situation: never resort to fixers.

Anne K.M., a housewife, her daughter, 7, and two sons, aged 5 and 2, on Sunday afternoon boarded a plane to the Philippines after waiting six long years to get their residency status legalised in the UAE.

“I have in my hands now our out pass. We’re flying to the Philippines today,” Anne Kristine told Gulf News before their flight on Sunday. “I can’t be any happier. Finally, the long wait is over,” she said, sobbing.

Anne and her three kids each racked up Dh178,100 in overstay fines since. Their ordeal began when Anne’s husband, Joseph, switched jobs in 2012 and his family’s visas had to be cancelled.

Joseph’s new visa was released. But it took months for the company to process his wife and three kids’ visas.

“Then, a friend recommended a PRO who had helped them previously. It was all based on trust. We paid him Dh24,000 in cash and gave him all our documents,” Anne said.

But every time they would ask the PRO for updates, he would give all sorts of empty promises.

Until one day, he disappeared — with their money and passports.

They filed a police case against the man, who apparently had duped other residents too. Their case was heard in court.

“It cost us a lot of money. In between, I got pregnant twice and had to deliver without insurance. We had to pay for everything out of pocket, even for my son’s vaccinations,” she said.

Living in constant fear and isolation, the family struggled to live in normality.

“We couldn’t send our kids to school. I’ve been home schooling them on my own. My daughter keeps asking me when she can go to school. She’d say, ‘Mum, you promised last year.’ But the next year came and still, we couldn’t send her to school.”

When the fines reached Dh712,400 for the four of them, it became too much to bear for Anne.

“I broke down in tears. We have no means to pay such a huge amount. We can’t afford to be banned in the UAE because our life is here now.”

Finally in December, the couple sought the help of Attorney Barney Almazar, director at Gulf Law, who guided them on the process of legalising their status in the UAE.

The GDRFA waived their fines and instead asked them to pay Dh4,000 each.

“I am grateful for the UAE government’s forgiving spirit. We felt as if a heavy load was removed from our shoulders. There’s still hope,” she said.

Anne urged residents going through the same experience to take her advice: “Please seek legal help right away and do not resort to fixers. We took a “shortcut” thinking it would make things easier for us, thinking it was legal, but it did the exact opposite.”

Almazar said people staying illegally in the country may legalise their status but there are grounds. In this family’s case, they were duped and they had proof. Therefore, they appealed their case and were heard.

Almazar cautioned those staying illegally to not waste time. “Act as early as possible because your fines will accumulate. If you plan to surrender to authorities, make sure that all your identification documents and supporting proof are in order. Know the law first. Only transact with immigration officials and pay at the counter,” Almazar told Gulf News.

As for Anne and the kids, she said they will take a short break in the Philippines and “will come back with valid visa to Dubai, our second home, and continue with life.”

This website is provided for general information purposes only and does not constitute any legal advice. It does not take into account your objectives, your instructions or all of the relevant facts and/or circumstances.

Gulf Law accepts no responsibility to any person who relies on the information provided on this website.